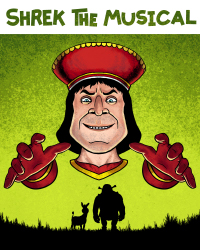 × “, which draws from William Steig’s book about a lovable ogre and the DreamWorks animated movie that it inspired, is nonetheless a triumph of comic imagination with a heart as big and warm as Santa’s. It is the most ingeniously wacky, transcendently tasteless Broadway musical since The Producers, and more family-friendly…” USA Today

Set in a mythical “once upon a time” sort of land, is the story of a hulking green ogre who, retreats to an ugly green swamp to exist in happy isolation. When a gang of homeless fairy-tale characters raid his sanctuary, having been evicted by Lord Farquaad, Shrek strikes a deal: I’ll get your homes back, if you give me my home back! But when Shrek and Farquaad meet, the Lord strikes a deal of his own: He’ll give the fairy-tale characters their homes back, if Shrek rescues Princess Fiona. Shrek obliges, yet finds something appealing–-something strange and different–-about this pretty princess.

SPONSORED BY THE DAVIS FAMILY